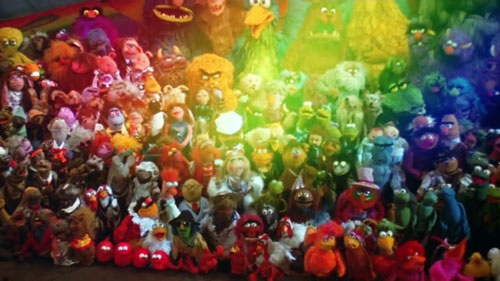 1979’s The Muppet Movie was a sweet origin story about how Kermit, Piggy, Fozzie and the gang crossed paths and decided to go to Hollywood to be stars with their own show.

When they finally get there and the booming of Orson Welles’ baritone informs his secretary to draw up the standard rich and famous contract, they’ve hit the big time. Of course being The Muppets, the set of their first big production descends into chaos, and soon Kermit and the whole gang are singing the final number amid the ensuing rubble.

The camera draws back for a high, wide shot, and if you’re quick you can see two familiar faces from elsewhere to the right of your screen, none other than Ernie and Bert from Sesame Street.

Did Jim Henson and director James Frawley want to reference the show that popularised puppets in the media age and paved the way for The Muppets, or did they just not have the time or budget to stitch all the puppets together they needed for the big scene?