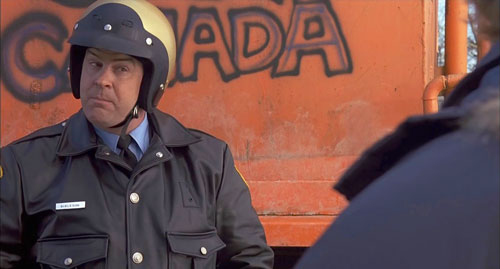 True Crime with Alicia Silverstone is a strange little mystery movie, a disjointed mix of Nancy Drew innocence in the lead character but with plenty of violence, a smattering of teenage sex and a fair amount of profanity. But listen right after Mary (Silvestone) and Tony (Kevin Dillon) discover the hanging body of Earl, the man they thought was the killer.

The scene changes and the cops are everywhere, interviewing Mary and Tony about their discovery. There in the background, over some police radio off camera comes the voice of a female operator saying ‘eight eight fourteen clear.’ Now watch Canadian Bacon, Michael Moore’s single fictional film. It’s not as creatively successful as his documentaries, feeling somewhat forced and ham fisted in it’s depiction of a soft US President (Alan Alda) convinced to whip up a phony war footing against Canada in order to bolster US military stocks.

But as Niagra cops John Candy and Rhea Pearlman roll along in their patrol car, you can distinctly hear the voice over the police band – the same young lady with the same ‘eight eight fourteen clear’ recording.