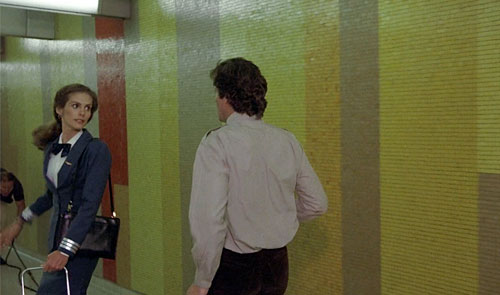 If you’re as much of a fan of the classic 1980 Zucker/Abrahams comedy Airplane! as 8814clear.com is, you’ll know the Terminal 6 tunnel very well.

It’s the very 70s-themed interior design that stands out as Ted (Robert Hays) catches up with Elaine (Julie Hagerty) after coming home to find the note explaining that she’s leaving him. The famed byway is adorned with tiny square tiles in bold vertical stripes of every colour of the rainbow (although in Airplane! we only see the brown, grey, orange and yellow section).

It’s famous not only as the scene for an emotionally wrenching confrontation in the annals of dramatic cinema as Elaine finds the bravery to say everything she wanted to say in the note when Ted unexpectedly turns up at LAX to stop her, but one of Airplane’s most famous goofs, where a camera grip is seen in the background scrambling to get out of the frame as he collects up lighting cables (see pic).

But if you’re a Quentin Tarantino fan, the Terminal 6 tunnel might be familiar. First of all, Pam Grier takes the travelator down the exact same hallway during the opening credits sequence of Jackie Brown, accompanied by Bobby Womack’s Across 110th Street. And in Once Upon a Time… in Hollywood, scenes shot at LAX were filmed there too.

But here’s the craziest thing. After Airplane! was filmed in 1979 you might expect the iconic walkway connecting the Terminal 6 rotunda with baggage claim was redressed for both Tarantino’s films, filmed in 1996 and 2018 respectively.

But as at least one website celebrating trivia about America’s most famous port shows, the garishly decorated thoroughfare was still declaring its loud and proud 1960s heritage as recently as 2017. Last time we were in the City of Angels, LAX was undergoing a major refurbishment, so no word yet on whether the tiles are intact.