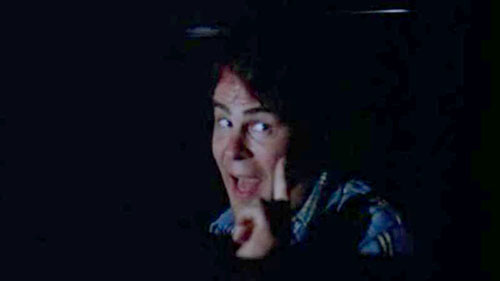 There’s a recording somewhere in a Hollywood vault you can hear in a hundred horror scenes, scenes set in jungles and scenes set in zoos from a hundred movies and TV shows. It’s the sound of a jaguar or puma roaring with considerable wrath.

I’ve searched on the web for an mp3 of it to no avail. You might have more luck than me, or it might be safely behind a firewall at one of the studios after they paid considerable money for a sound recordist to go to a zoo and torment a big cat.

But you know the weirdest place you’ll hear it? John Landis’ bookend sequences in 1983’s Twilight Zone movie. Dan Aykroyd and Albert Brooks are driving down a deserted road late at night discussing old TV shows when they start talking about The Twilight Zone and how scary it was.

‘Want to see something really scary?’ Dan says. He hides his face for a second, then turns on Albert having transformed into a long haired, grey-skinned zombie monster thing. And he emits none other than that famous recording of the roaring jaguar that’s as much a classic 70s icon as The French Connection.