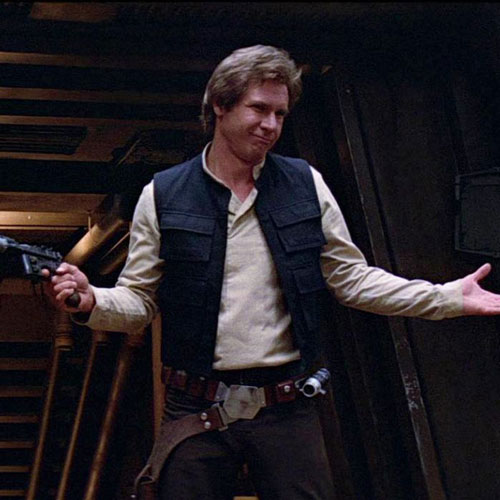 There comes a moment in Star Wars: The Force Awakens, during the battle of Takodana, when Han Solo and Chewbacca emerge from the ruins of Maz Kanata’s castle-cum-bar, where Solo raises his gun and fires at an unlucky first order trooper without even looking at his quarry. It’s like he just knew the guy was there…

Now, let’s think back to where Han and Chewie first entered the Star Wars canon. It was when Ben Kenobi hired him to fly Luke and himself to Alderaan at the Mos Eisley Cantina. Solo couldn’t have been further from a believer in The Force.

En route aboard the Millenium Falcon, when Ben is schooling Luke in the ways of the Jedi, Han even dismisses it as ‘a lot of simple tricks and nonsense’, saying ‘there’s no mystical energy field controlling my destiny’. Hokey religions indeed.

So how, 30 years later, is he able to aim and shoot at a moving target at least 20 metres away without even looking at it, using just the kind of simple tricks and nonsense he once derided?

Well, lets think about his history. He married and fathered a child with Princess (later General) Leia Organa, before their estrangement that saw him return to a life of crime with his first mate and which ultimately bought him back into the struggle with the Dark Side.

And as the twin sister of Luke Skywalker and the daughter of Anakin Skywalker, two of the most powerful Jedi knights in the galaxy, Leia was strongly force sensitive too, it was just never developed in her after she was delivered to the custody of Senator Bail Organa and his wife soon after her birth (at least until JJ Abrams’ retconning in The Rise of Skywalker).

What does all this tell you, other than the inescapable conclusion that force sensitivity isn’t just about training, a father figure mentor or even a high midichlorian count.

The Force is sexually transmitted!