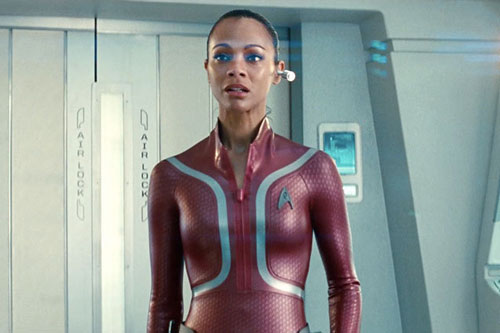 In 2004’s The Terminal, where Tom Hanks plays an itinerant immigrant forced to live at the airport when it turns out he has no home country status, he befriends various airport staff, among them janitor Diego Luna and customs officer Zoe Saldana.

Touched by the former’s pining for the latter from afar, Viktor (Hanks) uses daily trips to Dolores’ (Saldana) queue, fulfilling his immigration obligations one step at a time as a cover for passing information about her secret admirer.

When Viktor finally cracks Dolores’ no-nonsense, officious exterior, he finds the weak spot in her armour Enrique (Luna) can exploit – she loves Star Trek conventions. In 2009 Saldana went on to play Uhura in J J Abram’s successful and wonderful Star Trek reboot. Coincidence or not?