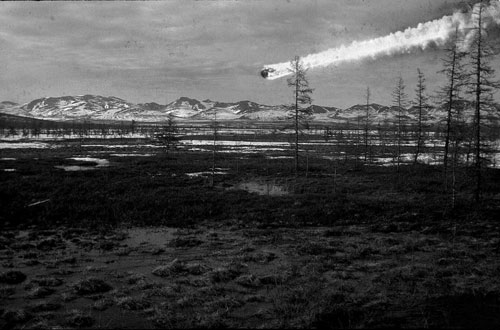 Mr Stay Puft has been defeated. After the explosive climax of Ghostbusters, his marshmallow flesh coats the roof of the Central Park West apartment building and the ghostbusters are just starting to pull themselves from the wreckage.

When Lewis Tully (Rick Moranis) is returned to normal after his brief sojourn in the body of demigod Zuul, Stanz (Dan Aykroyd) kindly helps him down to the street as Venkman (Bill Murray) enjoys his romantic reunion with Dana (Sigourney Weaver).

As he does so, Stanz cheerfully informs Lewis he’s been the subject of the biggest interdimensional crossrip since the Tunguska Blast of 1909. Ray was partly right – what scientists now believe to be a comet entered Earth’s atmosphere over Tunguska, Siberia, exploded while still five or ten kilometres up and obliterated 2,150 square kilometres of forest and everything in it (including up to three people).

ut what Ray (or Aykroyd and Harold Ramis when they wrote the script) didn’t realise was that the Tunguska event was actually in 1908.