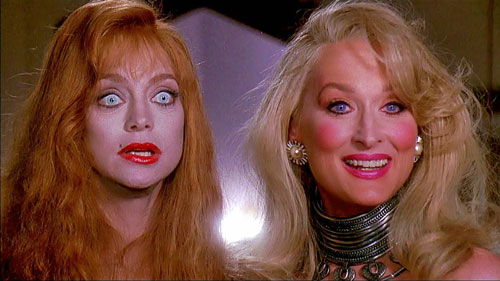 As every movie geek who grew up in the 70s or 80s knows, Doc Brown (Christopher Lloyd) took nearly 30 years to realise his vision of time travel after waking up from a fall with the flux capacitor as clear as day in his head.

That’s why the first ever trip through time (by a human) was taken by his friend Marty (Michael J Fox) early in the morning of October 26, 1985 while trying to escape the gunfire of Libyan nationalists upset after Doc has supplied them with used pinball machine parts instead of their promised plutonium.

Later on, in another fantastical universe from Back to The Future director Robert Zemeckis, vacuous show biz women Madeline (Meryl Streep) and Helen (Goldie Hawn) compete over everything – including Madeine’s husband Ernest (Bruce Willis).

But now the ultimate prize of 1992s Death Becomes Her is a serum to not only reverse but stop the aging process. Madeline needs no second bidding, certain it’s her final victory over her adversary. But when Helen turns up looking as young and gorgeous as Madeline does, she immediately knows what her old enemy’s been up to.

Madeline demands to know when Helen took the serum and the answer is October 26, 1985 – the day Marty McFly unwittingly drove the DeLorean straight to 1955.