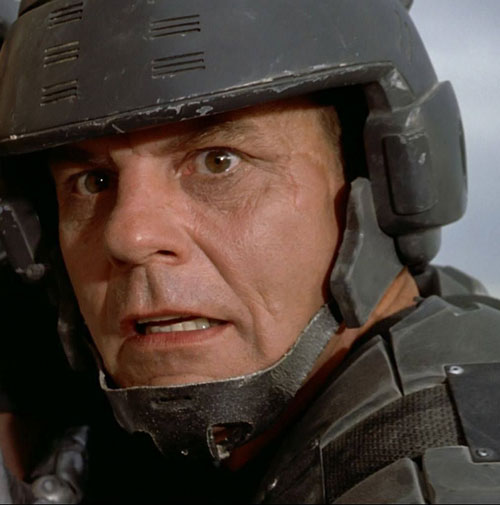 You remember Michael Ironside. Anyone who came of age in the 1980s remembers a cool show called V about an alien race invading Earth by pretending to be our friends but who were horrible lizard-like creatures under clever human masks. There’s actually a remake going on right now.

He played tough-as-nails mercenary Tyler, who joins the resistance and becomes one of their best fighters. Ironside’s been a staple of action/adventure TV and cinema since the late 1970s, and while he isn’t the only actor who usually plays characters who end up dead (shout out to Sean Bean), have you ever realised how many times he loses limbs? It must be written into his contracts or something.

n 1987’s Total Recall, after a brutal fight to the death against hero Doug Quaid (Arnold Schwarzenegger) during a long open-air elevator ride, Ironside’s character Richter is holding on to the edge of the platform when a support beam comes along and slices his arms right off, sending him plummeting to his death.

Ten years later he played teacher-turned soldier Mr Rasczak in Starship Troopers. During the bug siege at Fort Joe Smith, the block of flats-sized, ball-of-destructive-light-producing beetle burrows up underneath the compound where the mobile infantry are pinned down. Rasczak falls into the hole and his squadmates have to pull him back up – sans legs.

As Miller in ace 2004 twist thriller The Machinist, Ironside again loses an arm after catching it in an industrial machine when absent-minded hero Trevor (Christian Bale) leaves it on. If only Free Willy had attacked during the 1993 kids’ weepie and bitten his arm off as Dial, it would have completed the picture.

If you ever read this Michael, we all look forward to seeing what you lose next.