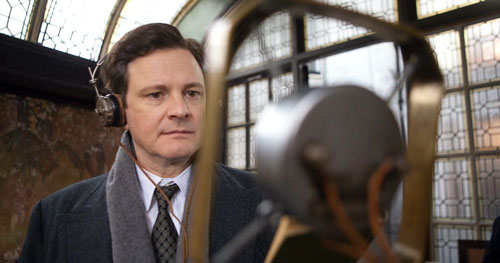 An 8814 Clear callback – the sumptuous, commanding Symphony Number 7 by Beethoven has popped up again in the movies. You might remember when I talked about it appearing in both John Boorman’s sci-fi head-scratcher Zardoz and Gaspar Noe’s stomach-churning Irreversible in rapid succession when I watched them so close together.

Now it appears again in Tom Hooper’s authentic and adorable The King’s Speech. After coaching the future King George VI (Colin Firth) for his stutter, speech pathologist Lionel Logue (Geoffrey Rush) is standing with the King for support and guidance when he delivers his 1939 speech rallying his people for war with Germany.

Beethoven’s work does the climatic scene great justice. As the King starts off nervously and quietly, the horns and strings slowly build to a crashing crescendo as he hits his stride and cements the skills as an orator that would come to characterise him.